Harley-Davidson forty eight test ride and I decided to buying a 48.

The first time I saw a real of the new Harley-Davidson Forty-Eight at dealer, I was smitten.

The impression is not forgotten. It was much pretty cool!

Harley-Davidson is a motorcycle of 1.5 times as many prices, in Japan.

I told the female salesclerk that I would like to test ride Harley-Davidson 48.

Please show me license,she said. And I take out the pocket,Yesterday I get it!  I said.
Congratulations.
It can ride on all the motorcycles! 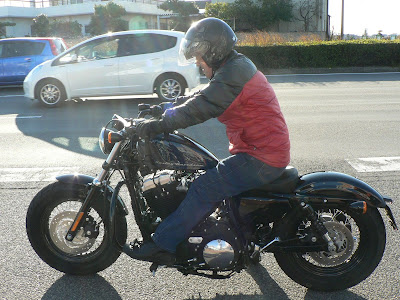 Since my height is 162 cm, the position of a leg is such touch in case of forward control.

My legs was completely extended at the steps.
Moreover, it is not generous.

My legs reaches the ground exactly. 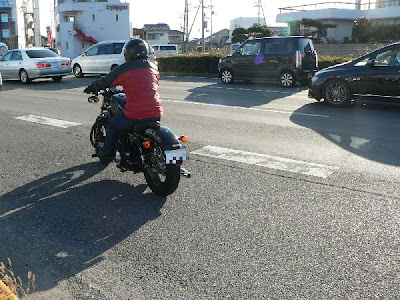 Since the sheet was low, it settled down very much and operation was completed.

It is a torque full engine.
My body will be brought to back shortly after turning an Accelerator just for a moment.

Since a leg could not reach a foot brake when stopping at the first signal, it was quite dangerous the rear brake did not work.

Position which sits down was changed after that and the position of the leg was adjusted somehow, and after the leg had arrived, it operated.
Also for safety, it was thought after all that mid control was required.

The test ride was completed and I decided to buying a forty eight.
Of course, it order with an option  mid control!
Posted by ハマちゃん at 18:57 No comments:

It has been three weeks since large-sized motorcycle license was acquired, but I would like to ride on a motorbike early very much.

I decide on the Harley purchase at this weekend.

I cannot ride,if I don't buy a motor cycle. And it decided, but My mind wavers,forty eight or night star.
Let's compare two types. 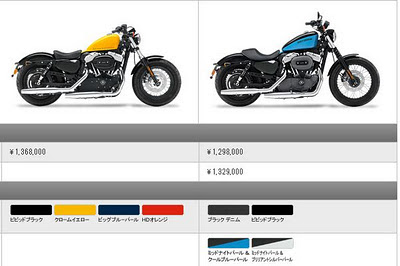 Performance does not change mostly.

On a touring, a night star with much tank capacity may be advantageous.

As for the left forty eight, gasoline(petrol) enter only 7.9L.

But this peanut tank is pretty cool and cute.

A big difference is a posture of operation.
Forty eight is forward control, And  I must choose mid control, a leg does not arrive at front step and rear brake. Because I am short.(165cm)


No, there is a method. Forty eight's forward control can exchanges  to mid control.
The price of the expense is about 1,000 dollars.(800euro)

I am short, but a leg reaches the ground exactly.

The dealer told me, if I order this type now, might be waiting for two months by the popular color.

Decides after test-riding once again.

How To Get A Motorcycle License : How to start the engine. The operation method of a brake.

How To Get A Motorcycle License

How to start the engine.  The operation method of a brake.

Instantly,Straddle motorcycle, a key is turned to the position of a start and a starter is turned. 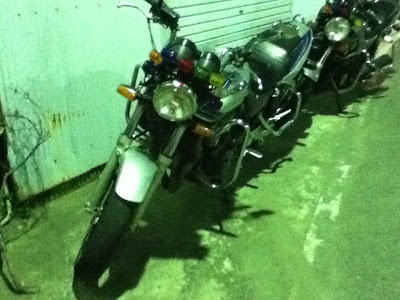 After practicing a little fundamental operation of a clutch or a brake, a motorcycle is actually run.
If it begins to run, it will hardly change to an easy motorbike.

The practice which practices a gear change or stops to a predetermined position is repeated.

By slope start, the fault the engine stop.
I miss winker switch pushing,  The big phon has been sounded to the instructor who is running front of me! hahaha!
Me: I am sorry, it mistook!
Instructor: "don't mind,"
I was panic shamefully.

But there was also a good thing.

Instructor said to me, -- the time of an end -- " You have those with an operation sense. "

The instructor is doing chinning exercises several times by being certainly a top steel frame of the entrance of a motorbike hut after motorcycle training record.

Physical strength is required for operation of a big bike.

How To Get A Motorcycle License

1st training.  How to push a motorcycle.

It begins from greeting an instructor.
Then, "Please take out a motorbike from a motorbike hut" is said instantly.
HONDA CB750 is heavy.
pushing motorcycle is so heavy than image. 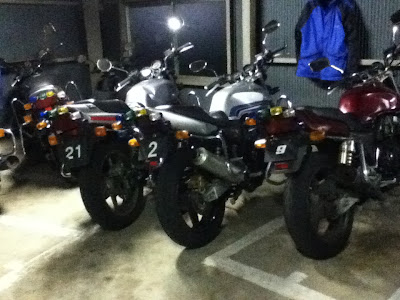 
Muscles twitch!
A motorbike is pushed and it moves to a predetermined position.
Since I pushed the motorcycle with a weight of 200 kg for the first time and walked, the breath became painful. If it does not take care about balance on either side, a motorbike will fall.

Harley-Davidson may be so heavy and may be hard to treat.
I was becoming somewhat uneasy.

2nd training How to pick up a motorcycle

How to pick up a fallen motorcycle is very easy.
Physical strength is unnecessary.
Using the principle of the lever, as a leg is stretched, it is raised.

Then, Instructors teach me an engine start method and the gear change method.
Today's trainings of all were ended.
I treated large-sized motorcycle for the first time for about 2 hours, I got muscular pain.
HAHAHA!
Posted by ハマちゃん at 22:49 No comments:

Hello, everyone.
My nickname is Hamachan.

customizing is more expensive.
However,  In Japan, HarleyDavidson -customizing stores have a lot of parts ,too.
An expensive part and a cheap part can be purchased via the Internet.
Of course, the dealer is also dealing with it. 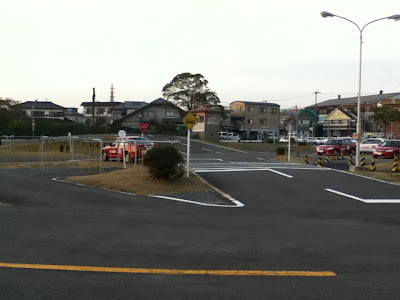 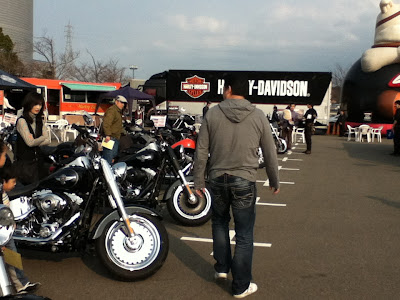 Hello, everyone.
I am the middle age of 46 years old which lives in Japan.

In order to obtain the license of a large-sized motorcycle today, it went into the motorcycle driving school.
License of the motorbike which it was wanting from a high school student.
my high school was too near from my house, the school side did not allow the license of the motorcycle.
A number of years or after ,when I was 18 years old and acquires ordinary motor vehicle license,
He was busy with marriage, child-rearing, and work, and forgot it a license of motorbike completely.
A certain year, staff reassignment occur and I moved to its post different from the place which was being committed till last year.
It was transferred to the heavy post of responsibility,The necessity for stress alleviation was imminent.

It remembered then.    I want to run in Harley-Davidson!
I decided to challenge, [ taking large-sized motorcycle license and riding on Harley-Davidson ].
Although it is such a little dream,I think that the this blog being surely helpful to someone.
I believed and decided to write this blog.

Please enjoy yourself, although he is poor at my English.
just, starting! 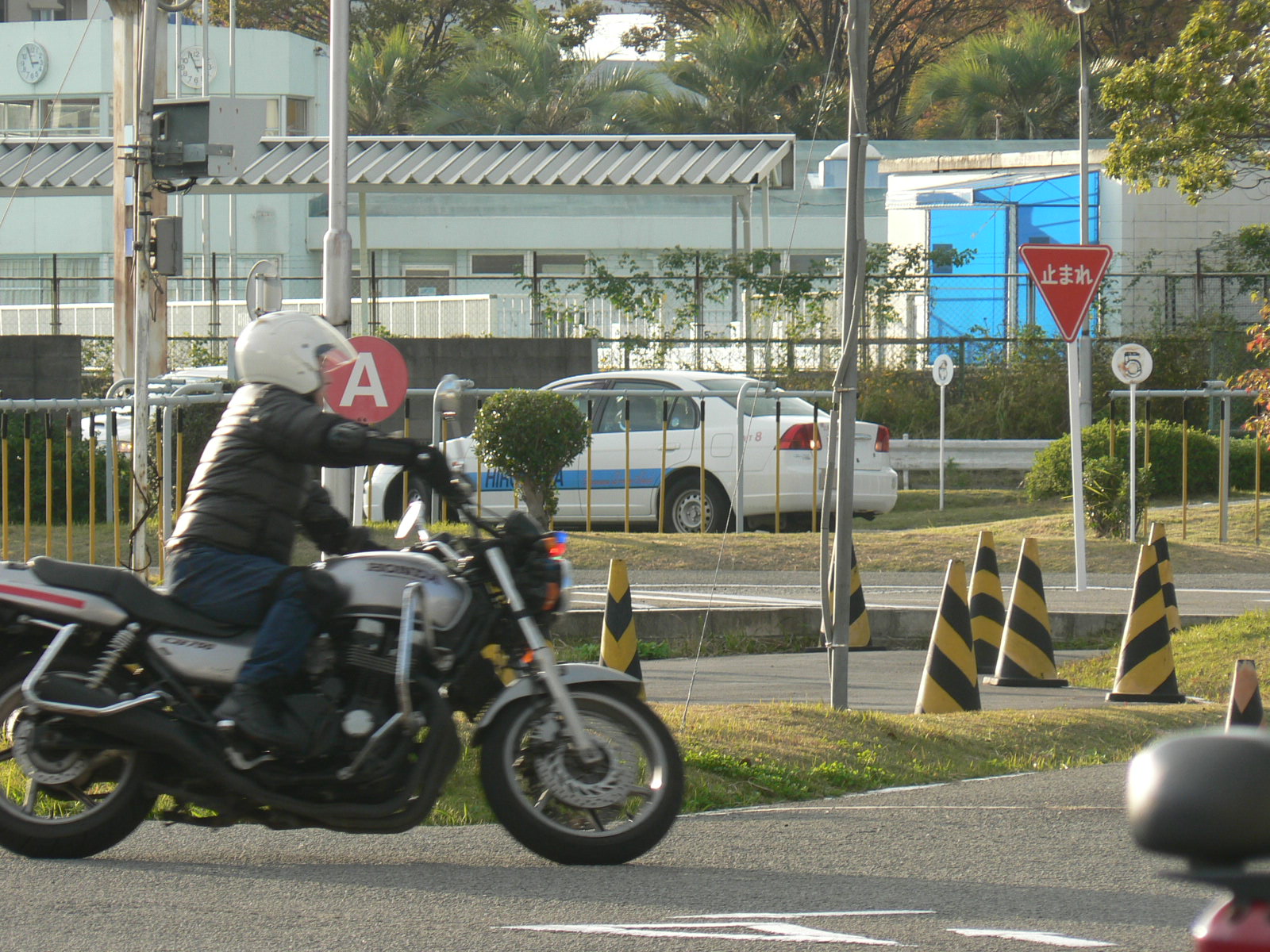 ←The motorcycle driving school in Japan
Posted by ハマちゃん at 23:42 No comments: